Mahima Chaudhary walked the ramp for Shobha Shringar Jewellers at the India International Jewellery week 2013 in Mumbai.Shobha Shringar Jewellers presented their “Neesha Collection” at the show. The jewellery showcased traditional Indian work such as vintage gold, polka and jadau. The collection was opulent in its essence and included precious stones like rubies, emeralds, south sea pearls as well as uncut diamonds.

The outfit was by the Bawaree label – which also showcased gowns, anarkalis and saris apart from layered lehengas. The actress wore two different jewellery sets for the opening and closing act of the show respectively. To open the show, she wore a bridal set that included a raani haar – comprising of four layers. This was paired with a wide and flat gold necklace.

A beautiful maang tikka, jhumka style drop earrings, pretty bangles and a statement ring comprised the other jewellery that she wore along. For the closing act, she looked like every bit of a royal princess in a polka and emerald set comprising of a thick choker and a longer necklace. Matching earrings adorned her ear. Also on display was a nathni on her nose, thick bangles and a floral designed ring. The jhumar on her head added to the regality of the look. 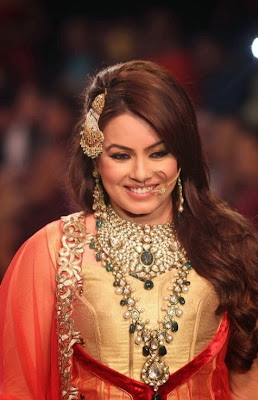